Last week, I spotted a story on io9.com that Barnes & Noble was having a blowout online sale on trade paperback comic anthologies. So I clicked over, and sure enough, there were a whole bunch of titles that had been reduced to $2.99. Most were of no interest to me, but I spotted three that I decided I wouldn't mind revisiting. The lesson for publishers? Put out a comic—I'll ignore it. Anthologize it. Wait 5-10 years. Drop the price by 80 percent or so, and you might get my attention. Yes, I am your Ideal Consumer, am I not?

Actually, that's not totally fair, because I did wind up purchasing one book at more or less full price, in addition to the three I got ultra-cheap. My total haul: the Chris Claremont/Frank Miller Wolverine limited series paperback and the two volumes of The Trouble With Girls, at $2.99 each, and Miller's Ronin for $16.99 or something like that. 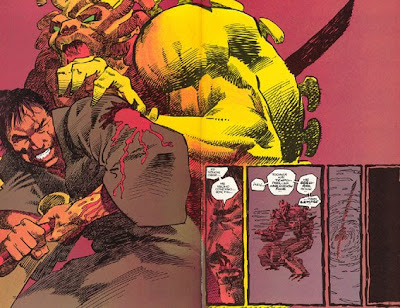 Ronin, for you youngsters, was a six-issue series Miller did immediately after leaving Marvel Comics for DC in the mid '80s. It was about a Japanese samurai who'd been battling a demon in his own time, but who was cast into a dystopian future through black magic before he could finish the job. In post-apocalypse (or maybe "brink-of-apocalypse" is more accurate) New York, he fights sewer mutants, ultra-baroque street gangs, and the demon he was chasing all along. There's much more to it, including corporate intrigue and a bunch of is-this-real? hoo-ha, but samurai vs. demon is the core of it.

. That's not a coincidence; SJ creator Genndy Tartakovsky has acknowledged lifting the core concept. (He also based an episode of SJ on 300, long before that comic became a movie.)

The first couple of issues of Ronin (and individual pages in the later ones) contain some of Miller's best artwork. There's real beauty on every page, not just in the way the characters are designed but the way the panels fit together and the way the action moves from panel to panel. It's tremendous stuff, much more impressive (to me) than, say, Watchmen, another series lauded for its art. 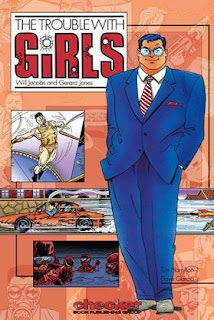 The Trouble With Girls is a whole other matter. These two paperback volumes contain the first 14 issues, which ran between 1988 and 1989, all based on a simple but funny idea—our hero, Lester Girls, is a secret agent who's neck-deep in beautiful women, crazed assassination attempts by enemies from every nation, and awesome adventures on land, sea and in the air, but all he really wants out of life is a quiet suburban home, a boring day job, and to finish reading John Steinbeck's The Red Pony. He reluctantly sulks his way through a string of mind-blowing exploits with his trusty sidekick, Apache Dick, all the while longing for a Ward Cleaver-esque existence he can never have.

It's written by Will Jacobs and Gerard Jones, two dudes who worked for National Lampoon in the early to mid '80s, and tonally it's not unlike something you might have seen in the back of that mag in those days, ripping on early- to mid-century manly-man pulp fiction and "men's adventure" novels of the Remo Williams/Mack Bolan style, including a fair amount of pretty raw ethnic humor and a shit-ton of sexism, not all of it satirical. I don't think it's as funny now as I did when I was fifteen, but it made me laugh more than a few times, so it was worth the six bucks.

The last thing I bought, a paperback containing the 1982 Wolverine four-issue mini-series and two related issues of X-Men (the latter two with art by someone other than Frank Miller), was a purchase based on pure nostalgia. I've never really liked comics about people with super-powers. I like Batman okay, because he's got nothing really going for him but untold billions of dollars and bottomless, obsessive rage. I liked Green Arrow (particularly Seventies "socially conscious" Green Arrow) for the same reason. And Wolverine, while he's clearly got super-powers (metal bones, healing abilities, animal senses), is in this mini-series at least more of a secret agent/commando than a costumed hero. He only wears his X-Men costume once, in the first issue of the mini-series; after that he's wearing jeans and boots, getting drunk and starting fights. Of course it's overwritten in boneheaded ways; every issue has to start with "I'm Wolverine. I've got these metal claws in my hands, and metal bones too, and I heal real fast," just in case it's someone, somewhere's first-ever Wolverine comic, or they were struck on the head by a brick between the last issue they purchased and this one. And the version of Japanese society portrayed in the comic is kinda ludicrous, too, of course. But the fights are very well-drawn, and the plot makes a reasonable amount of sense, so it's a fun, quick read. Which is all I wanted it to be.
Posted by Phil Freeman at 12:55 PM
Labels: chris claremont, frank miller, genndy tartakovsky, mack bolan, remo williams, ronin, samurai jack, the trouble with girls, watchmen, wolverine, x-men