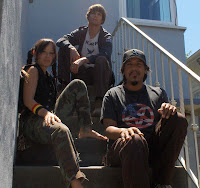 This week in the Scene:

Totimoshi is one of the most surprising and underrated bands in American hard rock. Given that it's touring with SoCal space-rock/bong-metal legends Nebula, you might expect it to be heavier and more resinous than it is. But the interplay between singer-guitarist Tony Aguilar and bassist Meg Castellanos, who are offstage partners, is frequently delicate and introspective, even on rave-ups like "Sound the Horn" (new album Milagrosa's opener) or the trancey, Latin-tinged desert metal of "The Seeing Eye." The band's latest drummer, Chris Fugitt, provides a subtly shifting foundation for the couple's riff excursions. No matter how loud things get on Milagrosa (and they get plenty loud at times), Page Hamilton's production - he helmed 2006's Ladrón for them too - keeps everything crisp and forceful. In fact, it might be more accurate to compare the Oakland-based Totimoshi to late '70s L.A. Chicano punk band the Plugz than to the Melvins or Nirvana, the two outfits they're most frequently placed alongside. Like the Plugz, they combine a uniquely Latin melancholy and emotional expressiveness with aggressive guitars and pummeling rhythms. On "El Emplazado," Aguilar even sings in Spanish, in a voice that's surprisingly similar in timbre to the Plugz' Tito Larriva.
Posted by Phil Freeman at 2:24 PM