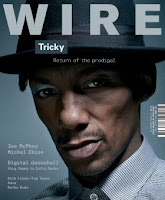 This disc is nearly submarined by its booklet essay, as ludicrous an outpouring of pseudo-intellectual jabber as written English has seen in some time. Writer Michael Anton Parker is attempting to gin up a movement he calls the "New Timbralism," by which he seems to mean that Totem>'s avoidance of typical guitar, bass and drum noises is somehow pioneering. He's wrong, though, and his empty-headed logorrhea ultimately does the music a disservice.

What this new improvising trio is doing is very good, but it's hardly unprecedented. Guitarist Bruce Eisenbeil has inherited a lot from Derek Bailey - the biting-on-tinfoil tone, the seemingly random strings of notes, the scrapes and zings and staticky disruptions. Totem> employ electric guitar, drums and upright bass, but they're not a jazz trio or blues-rock powermongers. They're working a unique nexus that's kinda Venn-diagrammatically equidistant from Bailey/Bennink, Main, and late Noxagt (after they swapped viola for guitar). Drummer Andrew Drury never plays what you'd call a beat or "keeps time," preferring to bow the cymbals, rattle stuff, and generally build an atmosphere of tense stasis. Similarly, bassist Tom Blancarte rarely walks or riffs, choosing instead to create a distorted roar with the bow, or pluck high notes almost indistinguishable from those escaping Eisenbeil's amplifier. The lack of traditional rhythm keeps these four tracks from developing real momentum, though the players do interact with and respond to one another, a less common phenomenon in contemporary improv than it should be. Solar Forge is enjoyable, but not revolutionary.
Posted by Phil Freeman at 6:00 PM