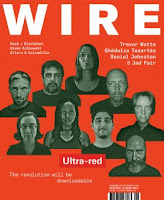 STEPHEN HAYNES/TAYLOR HO BYNUM
The Double Trio: Live At The Festival Of New Trumpet Music
Engine Studios
Unless you're talking strictly chronologically (as in "this is our new album"), the term new ought to be retired from discussions of jazz and jazz-derived improv - with a smile, not a resigned shrug or a defensive snarl. All the instruments played on this disc have been around for decades - centuries, in some cases - and every technique employed has been in the jazz toolkit for 40-plus years. The sounds trumpeters Haynes and Bynum are making may be unexpected in the moment, but are not unprecedented; there are great splashes of melody and lyricism here, particularly on the lovely, emotional version of Ornette Coleman's "Broken Shadows" and the romping take on Dizzy Gillespie's "Kush." When the group breaks into subsets, as on "Triple Duo," the dynamics will be familiar to jazz fans - trumpet/drums, guitar/drums.
Even when the two hornmen sputter and squeal in a manner reminiscent of their mentor and collaborator Bill Dixon, it's not shocking. But everyone present (Haynes, Bynum, guitarists Mary Halvorson and Allan Jaffe, and drummers Warren Smith and Tomas Fujiwara) is in top form, swinging and grooving in between bouts of pure three-on-three beauty. The compositions and improvisations alike reflect a considered group identity, never descending into chaos. Genuine newness is a near-impossibility in any genre, but jazz is a discourse, not a relay race with the baton of innovation passing from one player to another, and an album like this invigorates the genre by simply being really, really good.

WADADA LEO SMITH'S GOLDEN QUARTET
Tabligh
Cuneiform
It seems like false advertising to bill this as a Golden Quartet album, as trumpeter Smith is the only recurring member from the original lineup, which recorded a self-titled disc on Tzadik in 2000, and The Year Of The Elephant on Pi two years later. For this live outing, pianist Anthony Davis has been subbed by Vijay Iyer, bassist John Lindberg replaces Malachi Favors and drummer Jack DeJohnette's seat has been taken by Ronald Shannon Jackson. And this new group with an old name work together with a coiled intensity for a solid hour.
Smith's horn playing is spacious and meditative, befitting his Rastafarian beliefs; it's as if he's creating a real-time dub mix of his own lines. Opening track "Rosa Parks" is basically a tribute to Miles Davis circa 1969-70, with Iyer's Fender Rhodes and Lindberg's liquid, electric bass bolstered by Jackson's thunderous drumming as Smith unleashes ribbons of notes. "DeJohnette" offers acoustic instruments - Iyer speeds up and heads out as Lindner bows madly behind him - and a kind of free swing, while "Caravan Of Winter" and the title track are respectively a pointillist ballad and a 25-minute soundscape. Early on in the latter, a muted Smith returns to the land of Miles, every note considered and razor-sharp, but as the piece progresses, acoustic instruments and thoughtful freedom take over, including an apocalyptic Jackson solo to close things out.
Posted by Phil Freeman at 2:35 PM