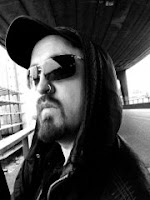 Feral MC Warrior Queen is one of producer Kevin Martin’s favorite foils; he’s featured her hypnotic, aggressive voice on two singles under his Razor X Productions rubric, and even shared billing with her on an EP. Now they’re working together again on his third album as The Bug, a more dubstep-conscious effort. It’s no bandwagon jump, it’s just rooted in ideas he’s been working with since 1995 or so, as curator of the Macro Dub Infection compilations and an his affiliation with Brooklyn’s Wordsound label.

This track, like the album it comes from, is slower and dubbier than other recent Martin productions, which were more about creating an industrial-strength, ultra-assaultive version of dancehall. Though the vocals still bounce to a dancehall rhythm, and there are klaxons and lasers in the depths of the mix, this is more of a creepy crawl than a floor-shaking stomper. It’s up to the Queen to keep the aggression level high, and she does just that. [Click here to hear/download the track, and read a really interesting, and slightly combative, email interview with Kevin Martin (who I've been a fan of since hearing God's Possession when I was about 18 or 19).]
Posted by Phil Freeman at 6:37 AM