[My first piece for the SF Weekly.] 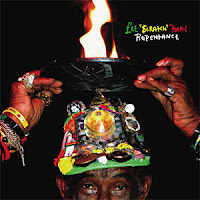 LEE PERRY
Repentance
Narnack
Onstage and in interviews, Lee "Scratch" Perry's persona is a mix of giddy surrealism, folk wisdom, apocalyptic theology, and simple crudity (fart jokes, raw sex talk). And while there's fun to be had listening to him ramble, when you unpack his riffs, there are deep worries in there — his lines about ghosts and Satan seem fueled by genuine belief. That darkness was reflected in his classic 1970s music, which transmogrified reggae into shamanic psychedelia anchored by massive, throbbing basslines. But since his Black Ark studio burned down in 1978, Perry has issued one lazy collaboration after another.

Repentance, which matches Perry with Andrew W.K. of all people, is far from sluggish. In fact, the legend sounds inspired on one of his most successful releases in decades. That's largely because of the element of surprise in this pairing: Scratch does his usual "crazy prophet" act, but the music behind him owes little to the party-rock for which W.K. is best known. Instead, the instrumentation comprises sparse electronic grooves and rhythms that gesture toward reggae, but via cheap-synth indie sounds (à la Spank Rock or M.I.A.). Hearing the septuagenarian talk dirty on "Pum Pum" and "Crazy Pimp" can be disconcerting, but the grooves are undeniable. Similarly, the end-times political preaching on "War Dance" is bolstered by hints of skronk and sonic disorder. Repentance is reminiscent of bluesman R.L. Burnside's late-career experiments with electronic music: Not what you might come expect from this particular artist, but occasionally verging on brilliant nonetheless.
Posted by Phil Freeman at 4:36 PM