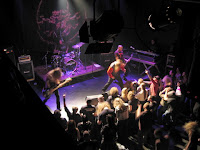 Swedish death metal legends Entombed are on a short U.S. tour built around their performance at last weekend's Maryland Deathfest, and I'd never seen them before, so I figured I'd catch the New York show. I was kinda hoping to get their late enough to miss the opening acts, because the website said the relatively unimpressive metalcore band Woe of Tyrants and the totally useless hardcore band Merauder would be on the bill. Well, I got there only a few minutes after eight PM, and my information was only 50% accurate. The first band was not Woe of Tyrants, but Gwynnbleidd, a very pleasant surprise.

Gwynnbleidd are a Polish-via-Brooklyn blackened death metal band with some folk tossed into the salad bowl, too. Their 2009 album Nostalgia is terrific; it sounds a lot like Opeth at times, but in what universe is that a bad thing? They were the first band, so they got shafted by the soundman, who didn't give them even half the power or fullness their complicated and aggressive, but beautiful music deserved. Still, they pulled off a good set and had some loyal (and vocal) fans in the crowd. So good for them.

Woe of Tyrants were on the bill, and they were up second. They set up quickly, but took a long time to get their sound together (apparently their drummer had four toms, but only three microphones for them, which baffled the in-house engineer). When they did get rolling, it seemed like they were forced to perform an abbreviated set, 'cause they only bashed through about five of their stamped-out, melodic death metal/metalcore songs before leaving the stage. Instrumentally speaking, they're fine. They sound like At the Gates, they sound like Darkest Hour, they sound like a zillion bands you've heard before. Their vocalist is the problem. He's goofy looking. He looks like Michael McDonald from MAD TV, and it's hard to watch him. But again, it was over soon.

Entombed was up next (no Merauder), and they were one of the loosest bands I've ever seen onstage. They almost reminded me of Eyehategod, but without the deliberately sculpted feedback and at twice the speed. They played a lot of old material ("Demon," "Wolverine Blues," their cover of Roky Erickson's "Night of the Vampire"), but after all, isn't it all old material? They haven't put out an album since 2007, and when I interviewed vocalist Lars-Goran Petrov last week, he told me they have some songs, but no scheduled plans to record or release them.

Anyway, the set was terrific. Petrov is an entertaining frontman, dressed half scruffy-rock 'n' roller and half homeless-guy and kinda shambling back and forth onstage, half hunched over like a cross between a gorilla and Ozzy Osbourne, and his voice is just as leonine and room-filling as it is on record. Even though the band only has one guitarist these days, that guitarist, Alex Hellid, keeps the trademark Entombed ultra-distorted roar going at full strength, and the rhythm section has death metal power but rock 'n' roll swing. They reminded me of Motörhead or one of Scott "Wino" Weinrich's bands—Spirit Caravan, The Hidden Hand—more than a standard "death metal" act. And even though it wasn't a super-packed house, everyone there seemed to be into it, too—they had one of the bigger moshpits I've seen in a while. These days, a lot of audiences, especially in New York, just kind of stand around watching the band like they're at a zoo or something. But Entombed got the people moving. This was a great, loud, aggressive rock show, and I had a blast.
Posted by Phil Freeman at 6:43 AM
Labels: entombed, gwynnbleidd, motörhead, opeth, ozzy osbourne, woe of tyrants

It was an awesome show. Huge sound for such a cavernous room. Good setlist too, covering all their eras. Lars is an entertaining frontman, his voice seems to have lost none of its power either.