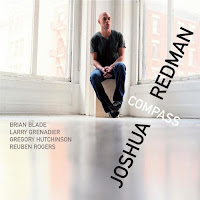 JOSHUA REDMAN
Compass (Nonesuch)
Joshua Redman has finally and fully come into his own as an artist. His last album, 2007's Back East, featured him in trio settings with three different rhythm sections and a few guests (including his father, the late Dewey Redman). This time, he's building on the trio-plus concept, bringing in two of the bassists and one of the drummers from Back East - Reuben Rogers, Larry Grenadier and Brian Blade, respectively - and adding drummer Greg Hutchinson.

On some tracks, Redman plays with one bassist and one drummer, on others with two bassists, and on still others with all four musicians backing him. This is an audacious move, one that risks devolving into chaos or at least confusion. But Redman is too canny a player to launch himself into full-on free jazz, a style he knows wouldn't suit him. He's a cerebral post-bopper with an ear for melody and he remains restrained even at the height of a solo. Consequently, on the track "Just Like You," the double rhythm section provides thunderous crescendos, rather than swirling combat. And even when there's only one bassist and one drummer, impeccable production keeps the swing pointillistic rather than convulsive.

To a degree, Redman keeps listeners at arm's length. On ballads, this gives his playing a stoicism reminiscent of a noir hero, standing in the rain under a streetlamp. On more upbeat tracks, it's like watching a performance from the doorway of a jazz club, rather than a table near the stage. Still, Compass' high points are instantly thrilling.
Posted by Phil Freeman at 10:41 AM