I got the new issue of Jazziz in the mail today; it's marked "January/February 2009." Having just left the magazine-editing business myself, I know why a delay like that happens - it's because checks aren't coming in the door fast enough to get one out the door to the printer, so your issues sit crated on the floor instead of heading to the distributors and wholesalers. It's the magazine's 25th Anniversary issue, and the covers (front and back) bear a large number 25, with a front coverline that reads "The First Quarter Century" and one on the back that reads, "What's next? Stay tuned..."

I will be paying attention, because I'm a longtime contributor to the magazine and enjoy reading it as much as writing for it. Jazziz bridges the gaps, covering smooth saxmen and free blowers, retro-swinging vocalists and keyboard-pounding avant-gardists in the same issue. It's a magazine without pretensions, and I like that. I also like that its editors challenge the writers to turn features into stories (there's a difference, you know). I've done some work I'm really proud of for Jazziz.

I was recently informed, though, that the magazine is going quarterly. It shifted from a monthly to 10-issues-per-year some time back (hence the Jan/Feb double issue), and that's a sign of tightening ad sales as much as anything else, but quarterly is "iceberg dead ahead" in publishing. I hope that's not the case; I hope Jazziz endures. In the meantime, I've got a story (and accompanying CD review) in the anniversary issue, reproduced below, and in a somewhat bitter irony, it's about an artist whose own health is in question right now. I hope David S. Ware endures, too.

Free to be free
David S. Ware and Matthew Shipp go their separate and intriguing ways

The dissolution of the David S. Ware Quartet in 2007, while a long time coming, was a big deal on the New York free jazz scene. Its members, an all-star team of astonishingly talented musicians, existed quite well independent of one another. Together, they built a sonic temple.

From the ashes of the quartet, new configurations arose. Saxophonist Ware and bassist William Parker form half of Ware's new band. Pianist Matthew Shipp, who always enjoyed a solo career parallel to the quartet's, is recording and performing in a trio with former Ware drummer Whit Dickey. Both groups share Joe Morris, who plays bass with Shipp but guitar with Ware.

"The way I put together musicians, it's more of a personal thing," Ware explains, regarding his decision to use a guitarist rather than a pianist in his new group. "Joe expressed the desire to play with me, so that was it, really."

The veteran musician, on the cusp of 60, is similarly matter-of-fact about composing for the group's debut CD, Shakti (AUM Fidelity). Instrumentation was not his major concern while writing, although he allows that he's still trying to adjust his music to guitar after so many years of working with piano.

"I sit down and whatever comes through that pencil is what comes, man. I'm not really thinking in terms of 'I've got this instrument and that instrument,'" he relates. "It's more of how [the individual musician] vibrates with me than about the instrument. It's more of who he is in relationship to who I am, in relationship to who the other players are. When I'm listening and experiencing [Morris] playing, I'm listening to the way he's moving and where he's trying to go. He doesn't play the guitar with a sustaining timbre; he puts it in a different space, and I'm trying to get familiar with that space."

Morris, the common element between Shipp's group - which just released the recording Harmonic Disorder on the Thirsty Ear imprint - and Ware's, sees similarities in his two bosses. "Both of them kind of create a situation for you to deal with the thematic material and the improvisational material coming off of them," he notes. "You're free to create it however you want....To me, the role is to sort of understand how the music of the leader is constructed and to support what that person does, and support the group. There are a lot of very subtle things about that."

Shipp, who's been working with Morris and Dickey in various contexts since the dawn of the '90s, appreciates the support of his longtime collaborators.

"We've been on the road a lot with this configuration and we know we have a thing," he says. "The thrill of discovery is still there, because it's still a fresh sound for all of us...but at the same time we have the security of knowing we're not going to fall into the abyss. I would say that we're finding a new way to be free, but using traditional jazz elements to anchor it."

Shipp, 47, has never been shy about preaching the virtues of his own work, and he speaks of his new trio in almost revolutionary terms. "We are jazz now," he states. "Keith Jarrett, Herbie Hancock, they aren't. They're relics. We are why the music lasts right now. What this album represents is state-of-the-art piano trio music, and somebody like Keith Jarrett or Herbie Hancock cannot get on the level that something like this is on."

And here's the review... 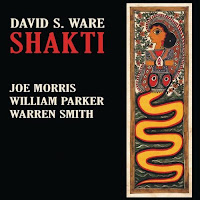 Saxophonist David S. Ware combines technical rigor with wall-cracking power, but his music is all about discipline: While his songs may nudge the half-hour mark live, he never seems to play an unnecessary note.

His first release since disbanding his revered quartet, Shakti feels slightly tentative at times, as Ware figures out exactly how to fit guitarist Joe Morris into his soundworld. Still, these six compositions reveal that Ware's flair for melody, command of harmonics and strong yet flexible leadership haven't lost anything since the quartet's late '90s heyday. 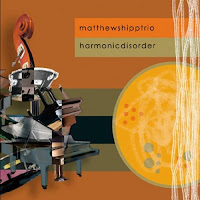 Ware's former pianist, Matthew Shipp, is releasing his second album with a trio featuring Morris, who plays bass here, and Whit Dickey on drums. It's more assertive than 2007's Piano Vortex, which sounded meditative, even melancholy at times. By contrast, Harmonic Disorder offers a welcome edge of chaos, recalling rough-and-tumble 1990s discs like Prism and The Multiplication Table.

Morris almost never takes the lead, preferring to lock in with Dickey. Shipp (specifically, his forceful left hand) is the lead voice almost all the time. Two vivisected standards, "There Will Never Be Another You" and "Someday My Prince Will Come," offer handholds for the uninitiated, but the final track's title, "When the Curtain Falls on the Jazz Theatre," tells the real story. This is jazz for a world that doesn't seem to need jazz anymore. Ware and Shipp insist otherwise, and the recorded evidence supports their assertion.

[Photo of David S. Ware by Eddy Westveer; photo of Matthew Shipp by Fstop45.]
Posted by Phil Freeman at 8:26 AM