From my inbox this morning: 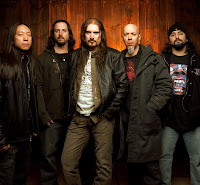 Progressive metal veterans Dream Theater have announced Black Clouds & Silver Linings as the title of their tenth studio album. Roadrunner will release the record on June 23. In addition to the standard CD, the album will also be available on vinyl, as well as a three-disc Special Edition CD that will include the full album, a CD of instrumental mixes of the album and a CD of six cover songs, which will be revealed at a later date. Six weeks prior to the June 23 street date, Roadrunner will release one cover song per week through digital retailers. The artwork was once again designed by Hugh Syme (Rush, Iron Maiden) and will be unveiled today via roadrunnerrecords.com and dreamtheater.net. The band will embark on a world tour in support of the album beginning in Europe throughout June, which will be followed by the second edition of the band’s Progressive Nation tour featuring Zappa Plays Zappa, Pain Of Salvation and Beardfish throughout North America in July/August.

I've tried to like Dream Theater. I know people who do. I crammed their three-CD live album Score and their two-CD best-of into my iPod (hell, they might still be in there) and attempted to listen to each in its entirety; I might have made it all the way through Score once, but I can't say for sure. I know I never made it through the best-of. But at least they had good taste in opening acts on last year's Progressive Nation tour - they came around with Opeth and Between the Buried and Me. This time, they appear to be going for the prog/jam band crossover dollar. I mean, Beardfish? Zappa Plays Zappa? Gurgh.

I think the problem is Dream Theater seem weirdly outdated now; their classicist, power-metalish take on progressive rawk is kinda lunkheaded and over-the-top...unsubtle in a bad way. They've never come to grips, it seems to me, with the way newer, younger progressive bands use dissonance and even noise as compositional tools - think about how skronky even the Mars Volta gets live, never mind acts like Hella, Orthrelm, the Flying Luttenbachers, etc., all of whom I'd definitely put on the "prog" continuum. 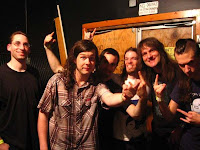 Here, on the other hand, is some much better news, straight from the MySpace blog of Pennsylvania instro-prog-metal underground heroes Dysrhythmia (pictured with members of Behold...the Arctopus and Spastic Ink/Watchtower guitarist Ron Jarzombek):

Colin and I (Kevin), along with John Longstreth (drummer - Origin) have officially joined the reactivated, much-hailed avant death metal band Gorguts. It is extremely exciting for us to be a part of this as past albums such as "Obscura" and "From Wisdom to Hate" have been large influences on our playing styles and the way we approach music in Dysrhythmia. For those already familiar with the band, you can rest assured the new material will crush and we will respect the band's past while forging ahead with some new ideas.. Gorguts mainman Luc Lemay has been writting some incredible material for us to work on.

All I can really say about that is...Duuuuuuude. Gorguts is now 50% Dysrhythmia and 25% Origin? I think I just had a rather embarrassing involuntary reaction, and need to go put on different pants.
Posted by Phil Freeman at 6:14 AM