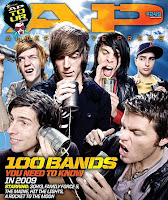 I haven't written anything but CD reviews for Alternative Press in quite a while, but that's starting to change, by dribs and drabs, here and there: I contributed the following blurb to their annual "100 Bands You Need to Know" roundup:

EYES SET TO KILL
HQ: Tempe, AZ
CHECK OUT: Reach (Breaksilence/Koch)
FOR THOSE WHO ROCK: Thursday, Kittie, Walls of Jericho
"We have grown up and developed a better grasp on the sound we want to achieve," says vocalist/guitarist Alexia Rodriguez of Eyes Set To Kill, the melodic screamo-metal band she co-leads with her bassist sister Anissa. "Our last album was all about personal conflicts, so for this album we want to make sure we bring something new to the table." She promises the band's next album (still untitled at press time) will be "a lot darker and heavier but still upbeat and melodic." Rodriguez and her bandmates are primarily concerned with transcending the, um, visceral appeal of a group featuring two hot Latina sisters, and being appreciated as artists. "I think that when anyone looks into AP and views a band picture with a couple of girls in the band, they think to themselves, 'I wonder if they are any good?' There are bands like Eisley, Meg & Dia and Tegan and Sara who are amazing bands and still haven't gotten over the whole sister-gimmick thing."

I also wrote up the following three excellent CDs: 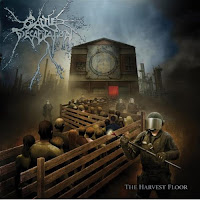 CATTLE DECAPITATION
The Harvest Floor
Metal Blade
Cattle Decapitation have been on a mission to promote vegetarianism through death metal and grindcore since 1997. Subtlety hasn't really been the band's thing - the original cover of 2004's Humanure, which depicted a cow defecating out a man, was banned. But their sound has evolved quite a bit from the 18 songs in 16 minutes of 1999's Human Jerky EP to this disc, which features guest appearances from Jackie Perez Gratz (of Grayceon and Amber Asylum) and Jarboe (Swans). Lyrically and musically, The Harvest Floor is an impressive work of art. The downtuned guitar riffs, barked/growled/shrieked vocals and frantic drumming are as brutal as ever, but there's a sophistication to every aspect of this album that wasn't present on earlier efforts. The Harvest Floor doesn't have the hooks of, say, Carcass' Heartwork, but it's a mature effort. 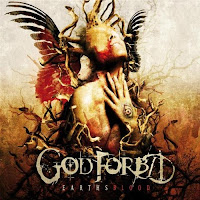 GOD FORBID
Earthsblood
Century Media
New Jersey's God Forbid have evolved from a metalcore band with a visual hook (four of the five members are mixed-race or African-American) to a melodic, mainstream metal band in the vein of Nevermore. Earthsblood is the group's second concept album in a row, shifting from the political allegories of 2005's IV: The Constitution Of Treason to environmental issues. Musically, the members have broadened their palette - guitar solos are more melodic and intricate, choruses catchier and more anthemic, rhythms more punishing, and the lead and background vocals alike are multidimensional and captivating. It's been four years since God Forbid released new music, and it's nice to see development in that time, especially on this level. With luck, Earthsblood will allow them to achieve the success they've long deserved. 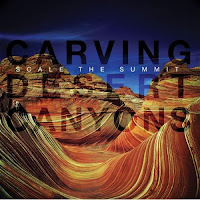 SCALE THE SUMMIT
Carving Desert Canyons
Prosthetic
Carving Desert Canyons' CD booklet unfolds into a poster that captures the dichotomy of the group: On one side, it offers photos of the band members making dorky faces, while the flip depicts some breathtakingly glorious rock formations. That same mix of dorkiness and mind-crushing awesomeness defines this instrumental album. Guitarists Chris Letchford and Travis LeVrier play screaming, arpeggiated leads a la Coheed And Cambria, while bassist Jordan Eberhard holds it down and drummer Pat Skeffington goes wild on the cymbals and toms. All the tracks blur into one another, but let's use words like "song cycle" instead of "samey," shall we? This is instrumental hard rock that spares the listener Pelican-esque tedium, instead offering all the technical brilliance of Rush or Coheed, without the annoying helium vocals.
Posted by Phil Freeman at 8:04 AM