BAND NAME OF THE MONTH? 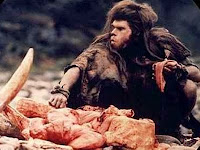 I got a self-titled CD in today's mail by a Canadian stoner rock/heavy psychedelic band called...Quest For Fire. (It's not bad; slow, and not as fuzzed out or aggressive as I might have liked, with lots of late '60s style guitar noodling rather than the early '70s stomp-box fury I'm usually after, though there's a bit of that, too. I also usually prefer a hoarse bark/yawp to the moody crooning heard here. But again, not bad by any means. It comes out in June on Tee Pee.)

Some promotional genius should put these guys out on tour with fellow canadians Bison B.C.. Maybe they could bring Early Man around on select dates.
Posted by Phil Freeman at 11:24 AM