WHAT DID JAZZ EVER DO TO THEM? 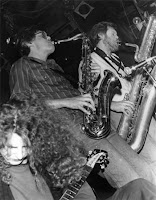 Today's mailbag brought a most welcome package: two CDs (one reissue and one new title) by Borbetomagus, one of the most awesome musical forces in all the world. Celebrating their 30th anniversary this year, this upstate New York trio (and sometimes quartet) has been a touchstone for me for over 20 years at this point; I first heard their Live in Allentown (cassette-only, back then, but reissued on CD with liner notes by me (which you can read here, if you're not of a mind to do what you really should do, and order a copy of the disc from Forced Exposure.)

Anyway, the Borbetos have been on somewhat of a reissue jag the past few years, digitizing some of their best early work (Barbed Wire Maggots, the aforementioned Live in Allentown), and they've added to that list with a digipak version of 1988's Snuff Jazz. Formerly two side-long slabs of ferocious blare, about 35 minutes of music in toto, it's been pumped up with the addition of two shorter, previously unreleased tracks (one just under eight minutes long, the other just under ten) from the same performance that yielded the first half of the original album. It's a fierce, howling storm of an album, featuring the core trio totally in command of their sound and their instruments, and highly recommended.

The other title is A Go-Go, recorded in 1998 but just released now. I haven't listened to that one yet, but like other Borbeto discs released in the post-vinyl era (Experience the Magic, Songs Our Mother Taught Us) it features a single half-hour-plus track bracketed by shorter pieces. So that should be fun for me and my neighbors.

these guys must have day jobs right?

Yeah. I know one of them works in a museum or something like that; no idea what the other two do for a living. But we're all of us gonna be Joads soon enough...