From this week's Village Voice: 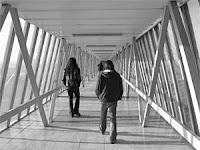 It's rare that a band truly leads by example, particularly in metal, where stylistic and genre parameters are strictly patrolled. The New York City avant-doom quartet Khanate, though, followed its own path from 2001 to 2006, combining a crushing musical and spiritual heaviness with a mastery of silence that created and sustained suspense without any of metal's usual horror-movie theatricality. You can hear the roots of their sound in the slow first half of the title track to Black Sabbath's namesake 1970 debut, except here, drummer Tim Wyskida's cymbals play the part of the rain and Stephen O'Malley's guitar echoes the church bells (and not Tony Iommi's gloomy riffing). Khanate's excoriating marathons of pain never permitted the cathartic release inherent in even the heaviest rock. Unfortunately, no group can operate at this level of intensity for long, and after two full-length CDs, several limited-run live CDs and DVDs, and 2006's Capture & Release EP, they split.

Now, some final recordings have emerged: the four-song, hour-long Clean Hands Go Foul, which features the band's shortest song (the six-minute "Wings From Spine") and its longest, the 33-minute "Every God Damn Thing." It's possibly the band's best release, the manner of its creation indicating a potential path Khanate might have pursued. "The music on CHGF was improvised during the Capture & Release sessions," says vocalist Alan Dubin. "James [Plotkin, bassist] cut the fat via computer butcher, so to speak, and assembled the pieces into four cohesive works. . . . I was given rough demos of these tracks and wrote the lyrics." Unfortunately, Khanate's interpersonal volatility seems to guarantee there won't be anything else forthcoming: In Plotkin's words, "Try to imagine a band consisting of a flake with multiple personalities, an egomaniacal control freak, an out-of-control attention whore, and a complete bastard with a volatile temper. It's amazing that we lasted as long as we did."

Wyskida, who continues to work with Plotkin, believes Khanate continued to evolve right up to the end. "Everybody in the group listened to a wide variety of music and had continual interest in music they hadn't heard before. The more you take in, the more interesting and unpredictable the things you shit out." Indeed, unpredictability of a truly ominous sort was one of Khanate's signal attributes. The live recordings, especially the DVDs, are masterpieces of sustained tension, as the achingly slow tempos, the feedback, and, above all, the volume allow Plotkin and O'Malley to bring the sound up, down, and around like dueling conductors while Dubin shrieks in hyper-realistic, unrelenting anguish. The audiences are held rapt, and when a chord does descend, it's like the ceiling falling in.

"There was always a pathway to continued evolution—or, rather, change—but only the four of us could be Khanate," Dubin says. "We were and are four creative, egocentric assholes, who at the same time have very unique imaginations and eclectic ideas about music. Had it continued, someone would have died."

So the band did instead. "My reason for ultimately letting it die was basically Plotkin leaving," he continues. "James made it clear that he wanted to do a lot more touring with the band. I have a very lucrative career that I'm passionate about, as a creative video/film editor, and was more than satisfied doing a few two- to three-week tours per year."

"I think Khanate was neglected to a point by other members' 'side' outlets, and that added piss to the dwindling fire," he adds, an assessment with which his bandmates concur. "The band did have a consistent issue with evenhandedness—people's attention or so-called dedication/commitment to what the other elements were hoping to accomplish or work together toward," admits O'Malley, who's currently recording and touring with Sunn O))), KTL, and other projects. "If we could have been a bit more patient and in agreement about how to work together, we could have taken it further. Regardless, what we did accomplish is some of the most interesting music I had the pleasure of being part of creating."

Khanate's music is hard to point out as being a glaringly obvious influence—the way you can tell a band's been listening to a lot of Iron Maiden or Slayer—and gigs were infrequent enough that you can easily believe that, yeah, the scene, in New York and elsewhere, will go on without them. But within the sub-basement of metal that is doom, Khanate showed that a way forward was possible—that merely playing slow, downtuned riffs and pounding the drums like you were guiding oarsmen wasn't enough. For all its apparent adherence to sonic orthodoxy, metal has long been secretly avant-garde, experimenting with sound in ways more mainstream rock bands can't or won't. Khanate's dissonant, oppressive, yet spacious music—along with its total lack of solos or traditional performance strategies—was so deliberately alienating that it raised questions about the very purpose of being at a metal show, and that's a challenge more bands should be willing to take.
Posted by Phil Freeman at 2:58 AM

That last sentence is a killer. Really fantastic.