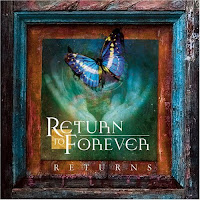 RETURN TO FOREVER
Returns (Eagle Rock)
If '70s fusion were a triangle - with the hard-rocking Mahavishnu Orchestra, Herbie Hancock's ultra-funky Mwandishi and Headhunters, and the jazzy, intricate Weather Report forming its points - Return to Forever would be right in the middle. This double disc, recorded on RTF's 2008 reunion tour, is a swirling hurricane of awesome. Keyboardist Chick Corea, guitarist Al Di Meola, bassist Stanley Clarke and drummer Lenny White rip through marathon versions of tunes like "Vulcan Worlds," "Song to the Pharoah Kings," "Duel of the Jester and the Tyrant" and "Hymn of the Seventh Galaxy," soloing like they're trying to launch themselves into space using nothing but the power of their flying fingers. It's not all amped-up prog-jazz, though. There are sections of delicate acoustic introspection, like a Di Meola/Corea duet that treads the line between flamenco and chamber music. Critically maligned at the time, fusion deserves reinvestigation, and this double disc showcases masters at work.
Posted by Phil Freeman at 6:33 AM