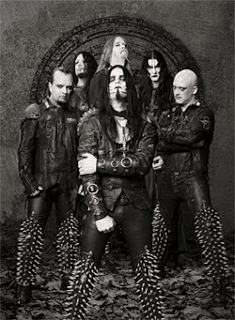 But on the band's latest disc, In Sorte Diaboli, the symphonic parts are played on keyboards by Øyvind "Mustis" Mustaparta. "The Prague Orchestra [heard on DCA] wasn't expensive at all compared to what you'd think. So it wasn't for budget reasons," says guitarist and primary songwriter Sven "Silenoz" Kopperud. "We thought that we'd been able to recreate most of the orchestral feeling live with just keyboards. And in the studio, if you have the right technology, there's no problem to create symphonic feeling." [Read the rest here.]
Posted by Phil Freeman at 9:41 AM