This entry inaugurates a new direction for this blog, at least temporarily. I've decided to spend the entire month of April digging into that huge pile of salsa, bugalu and Latin jazz CDs I got from Fania Records - one disc per day. I'm sure you're even more excited to know that I'll be posting my rambling, uninformed impressions right here, for your reading displeasure! Let's begin with the first album I listened to, while waiting in line at the post office on Monday morning: Siembra, by Willie Colón and Rubén Blades. 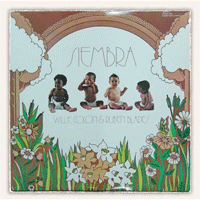 Siembra doesn't start out like a salsa album, or at least not like what I was expecting one to sound like. It begins with a thick funk bassline, with big swooping strings, some percussion, "woo-woo" background vocals...it's a straight funk song until about the 30- or 45-second mark. Then it gets full-on salsa, the rhythm changing as Colón's trombone starts shadowing Blades' vocals. My Spanish (which I'm working on at present) isn't nearly good enough to follow what he's on about, but the song's called "Plástico," and he's talking about a woman, so I'm assuming she's some sort of woman with plastic values who enjoys materialism more than spirituality, or whatever. I'm not a huge fan of Blades' vocals; at least based on this evidence, his range is kinda narrow, and he sounds like he's just telling a story rather than really singing out. I mean, he's a better singer than I am, in English or Spanish or any language, but he doesn't have the wall-toppling vocal power I was kind of expecting from a salsa record. He's more of a wry commentator than a belter.

Anyway, the second song, "Buscando Guayaba," is mellower, with some great piano. One of the things that kept me from listening to salsa for years was the piano sound - I just couldn't tolerate it. I was too into out-jazz piano (Cecil Taylor, Matt Shipp, Dave Burrell, and Bobby Few in particular) and the way those guys pounded the keys made the more lilting Latin sound annoying to me. On the other hand, I really love the bright horn sound in Latin music. When I briefly attempted the trumpet, that was what I really wanted to achieve - that blaring, brassy sound mariachi and salsa trumpeters all seemed to have. Back to "Buscando Guayaba" - it doesn't stay mellow, it gets going pretty strong, especially around the four-minute mark, when Colón and the other trombone player start roaring, one in each speaker.

The third track, "Pedro Navaja," is another story-song, this time with a very New York feel. It's got police sirens and street dialogue and sound effects in the background, like Stevie Wonder's "Living For The City," but the first verse is all Blades singing over soft hand percussion. The piece builds gradually, until by the end the whole band has come in and they're really ripping it up like a Latinsploitation movie soundtrack. Track four, though, is really weird and experimental. Remember what I was just saying about the piano? Well, forget it. "Maria Lionza" starts with these huge clanging piano chords like Cecil himself slamming the lid on his own fingers. This track's got a stomping rhythm, with guys in the back going "Huh!" really loud like angry dwarves in a coal mine, and the whole track is soaked in reverb - it's really weird and ominous-sounding, which is all the more baffling considering that as far as I can tell the lyrics are straight love stuff. But, of course, I could be totally wrong. The next two tracks, "Ojos" and "Dime," are probably the straightest ones on the whole record. They're enjoyable enough, rhythmically propulsive and all that, with nice work by the whole band, but they don't stand out like the weird-ass shit that's come before. They're just a lead-in to the title track, which ends the disc. It's another big soundtracky song full of strings and drama, with Blades claiming he's the conscience of Latinos or something as it gets started, and an all-male background chorus that takes a lot of the vocal weight. Still, this is probably Blades' best vocal on the whole record. At the end, he and Colón start talking a little bit, thanking the other for being on the record, and then it all ends abruptly, with one last blast of the trombone.

This is a pretty killin' record, much weirder and less orthodox than I'd expected a sort of big-names summit conference album to be. I don't know how it's gonna wind up coloring my impressions of all the other stuff.
Posted by Phil Freeman at 7:39 AM

Well, there are many styles. Not all soneros are belters. There are crooners, soneros, boleristos and so forth. There is a tradition of storytelling in Latin music, and the simple narrative approach isnt unheard of. Salsa is a catch-all term that encompasses many styles and folkloric genres, so there is a wide variety of vocal styles.