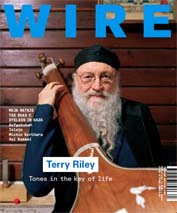 FRED ANDERSON & HAMID DRAKE
From The River To The Ocean
Thrill Jockey
There's a reason saxophonist Fred Anderson and drummer Hamid Drake have been working together since the 1970s: they're kindred spirits where the music is concerned. Despite the co-billing, this isn't a sequel to their 2001 duo disc Back Together Again. Instead, it's a full group effort, featuring guitarist Jeff Parker and bassists Harrison Bankhead and Josh Abrams, the former also contributing cello and piano and the latter playing guimbri on two tracks.
The album takes Anderson into territory he hasn't mined much in the past; his recordings as a leader have tended toward expansive but fundamentally blues-based free jazz, but From The River To The Ocean is defined as much by Drake's spirituality and global approach to rhythm as it is the saxophonist's Chicago traditionalism.
The final track, "Sakti/Shiva," is the most surprising piece on the disc, a duo for saxophone and guimbri reminiscent of Pharoah Sanders's 1994 collaboration with Maleem Mahmoud Ghania, Trance Of The Seven Colors. The marathon opening cut, "Planet E," also recalls Sanders's early-70s work, with its modal groove underpinned by two basses, over which Anderson and Parker trade lengthy, discursive solos. Drake emerges as a vocalist on "For Brother Thompson," chanting a Muslim prayer in tribute to the late bassist Malachi Thompson. Bankhead plays piano on the cut, adding to the elegiac Coltrane-like feel.
The title track, on which Drake chants again, has an almost tribal touch; Parker's guitar is flanked by Bankhead's bass and Abrams's guimbri, while Drake plays frame drum instead of sitting behind a kit. Anderson barely plays for the first seven minutes of the piece; instead, Parker takes the lead, his tone metallic and jagged, more like a mbira than a guitar. The ensemble create a spiritual drone reminiscent of Carlos Santana's collaboration with Alice Coltrane, Illuminations.
From The River To The Ocean is unique in Anderson's discography, taking him far from the bluesy, sometimes meandering territory he's made his own. This kind of adventurousness is admirable, especially when the results are this inspired.

CHARLES TOLLIVER BIG BAND
With Love
Mosaic/Blue Note
Charles Tolliver's approach to big band music doesn't have much to do with Ellington-esque swing. Nor is he amassing musicians for a collective blarefest in the mode of John Coltrane's Ascension or the Jazz Composers Orchestra. It's a neither-fish-nor-fowl thing he's doing on With Love, composing for a core group with ornamentation by the larger ensemble. With the seven tracks running between six and just under 11 minutes, solo space is at a premium.
The trumpeter himself blows on all but one, and there's always time for a spotlight turn by pianists Robert Glasper and Stanley Cowell (who co-founded the Strata-East label with Tolliver in the late 1960s). Various saxophonists (Todd Bashore and Craig Handy on altos, Bill Saxton and Billy Harper on tenor, and Howard Johnson on baritone) step to the microphone, as does trombonist Stafford Hunter. And on "Suspicion," bassist Cecil McBee and Tolliver's guitarist son Ched get time to shine. Tolliver's tone is sharp and gritty at once - he heads for the horn's upper register like a rocket on the opening "Rejoicin'", as the rhythm section sprints in waltz time behind him.
The title track grooves hard; drummer Victor Lewis is masterful throughout the disc. In addition, unexpected touches, like the jabbing trumpet shrieks that open "Round Midnight," justify the group's size, but this is ultimately a marvelous hard bop album, with reinforcements at the ready.
Posted by Phil Freeman at 7:32 AM

I've been digging From the River to the Ocean for a while now...here's the review I wrote on my blog