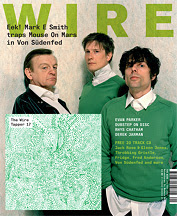 EARTH
Hibernaculum
Southern Lord
The second release from the rejuvenated, country-fried incarnation of original sludge rockers Earth is similar in spirit to its predecessor, 2006's Hex, Or Printing In The Infernal Method. Earth here are centered around Dylan Carlson's guitar and Adrienne Davies's drums, augmented by piano, organ, trombone and occasional bass from Sunn O))) co-leader and Southern Lord label head Greg Anderson. "A Plague Of Angels," previously available on a tour-only 12", spans nearly half of the EP's 35 minutes, and the first three tracks are reworkings of old album cuts.
Carlson's simple riffs work just as well in a twanging Ry Cooder style as they do under waves of amp-frying sludge, a shift in direction which has retained the support of the doom-loving masses. The next Earth CD is rumored to feature Bill Frisell, which could either be startling or the patience-tester of all time.
The DVD that makes up the second half of this package is certainly something of an endurance test, however. A document of the band's post-Hex European tour, it offers interview footage - Carlson speaks faster than he plays, but not by much - some performance clips and lots of highways seen through rain-streaked windshields. The documentary reflects the music it depicts - a long journey to a melancholy destination - but intertia gives the journey a magnetic pull and eventually something between resignation and fascination sets in.

DAVID TORN
Prezens
ECM
Guitarist, composer and producer David Torn is a master of both technology and his instrument. This album finds him fronting a pre-existing group: Tim Berne's Hard Cell (with Berne on alto sax, keyboardist Craig Taborn, and drummer Tom Rainey). There's a longstanding friendship and musical relationship at work here - Torn has produced, mixed or mastered several albums for Berne's various ensembles.
All four players are working in extremely tight mental sync, at least in the parts where you can hear what was actually being played. The rest of the time, Torn performs radical reconstructive surgery on the music, which emerges like a man with a third leg and extra arms in the middle of his back who still manages to dance like Fred Astaire.
The opening cut, "Ak," is a laptop-era blues, with Torn chunking out wiry, Steve Cropper-esque lines before erupting in a manner similar to Gary Smith's "stereo guitar" pieces, or Rene Akhan's work with Burnt Sugar. For most of the album, though, he plays in a subdued, Bill Frisell-like style, while the music is relentlessly shredded, chittering and clicking away in a mass of glitches and whooshes. Passages Torn likes are looped, stuttered and layered; aside from a few brilliant, unaltered solos from Berne, the group performance is simply fodder for the later electronic shredding. But bravo to Torn for getting his hands dirty.
Posted by Phil Freeman at 7:09 AM