I haven't posted a new Learning Latin entry in awhile, but...well, I've been busy with jazz (got an obit for Andrew Hill running in the Village Voice I think next week) and metal (interviewed French doom metal band Monarch for Metal Maniacs magazine) and other, non-Fania Latin discs, too. I got three amazing compilations in the mail recently: New York Latin Hustle!, a typically great 2CD set on Soul Jazz; ¡Gozalo!: Bugalu Tropical Vol. 1, a terrific pile-up of rare Peruvian tracks mixing bugalu, jazz, psychedelic rock and more, all from the late ’60s, on Vampisoul; and Colombia!, a compilation of tracks from that country’s Discos Fuentes label, on Soundways. (The relentless deployment of exclamation marks in all these album titles might seem silly, unless you’ve actually heard the records.) Plus putting together one more issue of Global Rhythm...But anyway, I finally had some time to return to this project this morning, on a leisurely walk around town, and based on advice from someone who knows way more about salsa than me, I picked this album off the pile. 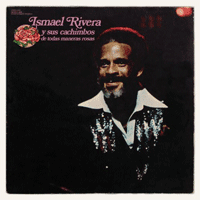 Ismael Rivera's got a great voice. He kind of makes me think he could be Tego Calderón's uncle or something; they've got similar vocal timbre and share a thick Puerto Rican accent, though Rivera's about 1000x more comprehensible than Tego - I can pick out whole lines of lyrics on this album, whereas El Subestimado is pretty much a brick wall of macho mumbling. The band on this record is tight, without seeming tense or jumpy. The relatively small horn section (one trumpet, one trombone, one saxophone) doesn't have the gleaming blare of some of the other records I've been listening to, offering more of a jazzy, blurry warmth, without sacrificing the punch that salsa depends on. The guy playing the tres is really good, too; not as jagged as the guy I called out earlier on the Celia Cruz et al. disc, but still cutting right through the group sound with that weird barbed-wire jangle that only that instrument seems to produce. (Avant-jazz guitarist Joe Morris should get himself one of those; he could do amazing things with that sound, I bet.) Anyway, this album is the sound of a guy completely at peace with himself and his style. He doesn't seem like a performer - you never hear him sweating, or striving to convince you, the listener, of something he's not convinced of himself. He's got a kind of...proletarian mixture of gruffness and placid joy to his voice that's really captivating. He's not going over the top, but he's not talk-singing either. I guess I'd compare him to a saxophonist like Hank Mobley, a guy who was regarded in his time as kind of middle-of-the-road and even decried as bland by folks who wanted more fire 'n' fury from jazz, but whose work stands up incredibly well 40 or even 50 years later. I could listen to Hank Mobley all day, and this album makes me feel the same way about Ismael Rivera.
Posted by Phil Freeman at 8:27 AM