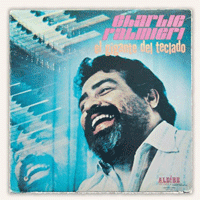 Well, we've hit our first stumbling block. Charlie Palmieri's El Gigante del Teclado is the first in this series of albums to leave no impression on me whatsoever. I'm not saying it's a bad record (he can certainly play, as "Sedante de Rhumba" makes very clear), but there's nothing unique or particularly interesting about it, to my ear. The seven songs all sort of blend together - except for "Que Se Vaya," which busts out the heavy reverb and finds Palmieri switching from piano to organ - in a way that makes me think of cruise-ship music. The album cover has that same effect - there's Charlie's big grinnin' head, and okay, but is there any larger significance to this record beyond innocuous, temporary listener pleasure? Sure, there are plenty of circumstances under which that's enough and more, but not for me, not right now. Most of the records I heard last week had, if not "hidden depths" per se, at least the impact of revelation. Maybe it's because the novelty of listening to salsa and related musics has worn off and only now am I starting to consider these discs on their own merits, but I don't think so. There was a lot of good stuff last week. This one is pretty good, but it's nowhere near as world-shaking (my world, anyway) as La Lupe Es La Reina was, or Siembra, or even Recordando El Ayer for that matter. Tomorrow, I'm gonna hedge my bets and go with something I feel confident will slap my head around - Willie Colón's El Malo. (BTW, I dug through the Colón section of my local CD store this weekend, and just about every album I saw was working that silly musician-as-gangster/trombone-as-Tommy-gun thing. I can see that being cool for one record, but there were at least a half dozen, it seemed to me, and they were probably all recorded within a three-year span. I'm just sayin' - get a new gimmick.)
Posted by Phil Freeman at 11:40 AM

hey, it was the 60's and they were still teenagers, dont let the gun thing fool you
The Hustler, El Malo, Asalto Navideno 1 &2 are absolutely FANTASTIC
Get them.
Ignore Charlie P and get some Eddie P. And try Cesta AllStars as well.

Yeah right, ignore Charlie P. Ignore the ten minute or so version of "Tiene Sabor" with the relentless bottom-heavy rhythm and the surprise melodica solo at the end. (He probably would like the Cesta All Stars though.)