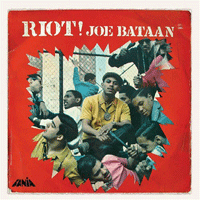 So yesterday I listened to Joe Bataan's Riot. Like "Pedro Navaja," from Siembra, it opens with tape of sirens and other city sounds, but that's where the similarities end. This album's from the late '60s, but it actually sounds a few years older than that to me. It's more like a soul record with somebody playing timbales; there are only three songs in Spanish, out of nine, and they're doing versions of songs like "For Your Love," "What Good Is A Castle" and "Daddy's Coming Home" that are straight off some Fifties street corner. In fact, that's the impression that sticks with me most strongly about this album - not how Latin it is, but how New York it is (not like those two are exactly mutually exclusive, but you see what I mean).

At first, I thought the sort-of title track "It's A Good Feeling (Riot)" was gonna be more politically engaged; Bataan starts off talking about how "everybody's doin' it, they're doin' it in Vietnam too" and like that, but then it becomes a straight positive-thinking track, talking about how there's always somebody there to make you feel good no matter how bad things get, and blah de blah de blah. I was looking forward to some kind of ironic pro-rioting anthem, talking about how good it feels to break shit, but no such luck. Anyway, this album reminds me of a bunch of songs I've heard before (and I'm not talking about the original recordings of some of the tunes covered), but I can't remember exactly which ones. What it really reminds me of most, though, is some soul singer from the Lee Marvin movie Point Blank. There's this amazing scene where Marvin goes into a club while this guy is performing, goes backstage, gets jumped by some other thug, and just whips the living shit out of the guy. It's an absolutely savage beating, one of my favorite movie fight scenes of all time, and the director, John Boorman, keeps cutting back to the singer, who's just screaming and howling like he's possessed or something. And I feel like some of the songs on Riot, especially the Spanish-language ones like "Muñeca" or "Mambo de Bataan," could have worked just as well in that context. At the same time, there's a lot of energy even in the sappy romantic songs like "My Cloud" and "Daddy's Coming Home," and the raw feel of it is pure New York. Another winner - three for three so far. Me likey the musica Latina.
Posted by Phil Freeman at 7:43 AM